Holy sites in Jerusalem’s Old City, including the Western Wall and Dome of the Rock, on March 13, 2019. RNS photo by Emily McFarlan Miller

(RNS) — U.S. Secretary of State Mike Pompeo defended his department’s decision to drop the word “occupation” from its description of the Golan Heights and Palestinian territories and said people of all faiths will have “something to say” about the Israeli-Palestinian peace plan the White House is expected to announce after Israel’s elections in two weeks.

Pompeo’s remarks came Monday (March 18) during a phone briefing with a small group of media outlets as he was leaving for a five-day trip to Beirut, Jerusalem and Kuwait City.

The secretary of state said his trip will include “different missions, different places.”

But in each place, Pompeo said the agenda will be “very focused on not only the security aspects of the relationship between our countries and the economic aspect but also the challenges we face from radical Islamic terrorism in the region and working to promote religious tolerance in each of those places as well.” Secretary of State Mike Pompeo addresses the final day of the Ministerial to Advance Religious Freedom at the State Department in Washington on July 26, 2018. RNS photo by Adelle M. Banks

The briefing caused controversy after a member of the State Department press corps reportedly was invited to take part in the call and then disinvited after being told the call was limited to “faith-based media.”

While it was not clear which outlets were part of the call, questions were asked by Religion News Service, Jewish Telegraphic Agency, Algemeiner, World Magazine and The Leaven, the newspaper of the Roman Catholic Archdiocese of Kansas City in Kansas. America Magazine also participated in the call. Participants were not told that the call was limited to faith-based media.

(Religion News Service is not a faith-based media organization, but rather a secular news service that covers religion, spirituality and ethics.)

Pompeo’s trip comes a week after the State Department released its Country Reports on Human Rights Practices for 2018 with no mention of “occupation” in regards to the Golan Heights and Palestinian territories.

Instead, with the exception of direct quotes, the report referred to the “Israeli-controlled Golan Heights” and “areas under (Israel’s) control.”

That’s a departure from past human rights reports, according to The Jerusalem Post. Last year, the department had described the areas as “occupied” by Israel, it said. And two years ago, the State Department changed the heading from “Israel and The Occupied Territories” to “Israel, Golan Heights, West Bank and Gaza,” it said.

Pompeo said Monday the language in the most recent report “most accurately reflects the facts.”

The human rights report is not a policy document, he said.

“It simply documents human rights abuses around the world and attempts to provide a baseline upon which not only here in the United States but countries all around the world can measure their own performance and the performance of others,” Pompeo said. “And so the language we chose to use there was a result of our determination that most factually represented the reality on the ground.” A an old Israeli army outpost atop Mt. Bental in the Golan Heights on March 10, 2019. The U.S. State Department has changed how it refers to the West Bank, Gaza and the Golan Heights. RNS photo by Emily McFarlan Miller

Israel took the Golan Heights from Syria in the Six-Day War in 1967 and annexed it in 1981, a move that has not been recognized internationally. It has occupied the West Bank since 1967 and withdrew from Gaza in 2005.

“I will start an effort to recognize the Golan as part of the State of Israel now and forever,” Graham said during his trip, according to CNN.

Pompeo declined to comment on his schedule. When asked if he would mention or visit the Golan Heights during his visit, he said, “I’m not going to foreshadow the remarks that I’ll make while I’m there.”

The secretary of state also would not say whether he would meet with Netanyahu challenger Benny Gantz during his visit, which comes just before Israel’s April 9 elections. 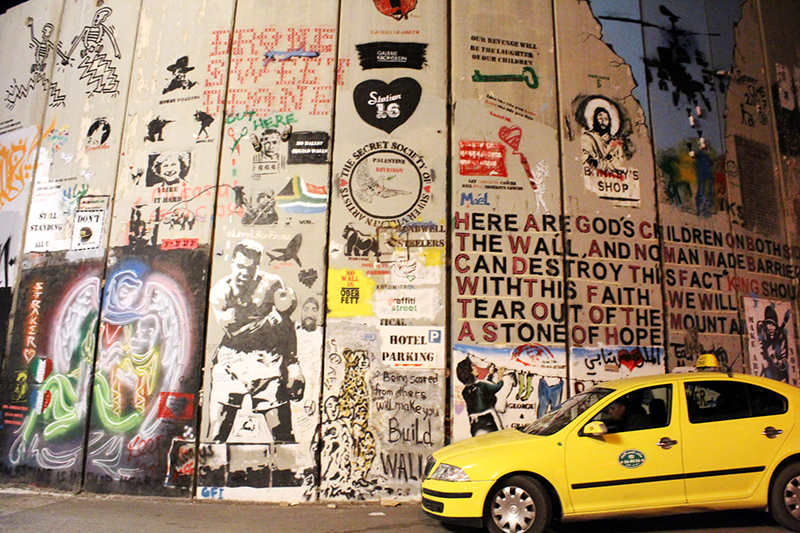 Spray painted Biblical references and other graffiti cover the Israeli-built separation barrier that runs through downtown Bethlehem near the Baraka Church in the West Bank. RNS photo by Dan Rabb

Pompeo said he couldn’t comment on what the White House did, but that officials were working to make sure a “broad base of people have an understanding of the plan as we will present it.”

“As an evangelical Christian myself, I’ve always understood the centrality of that place. I think many evangelical leaders believe that as well,” he said.

People of all Abrahamic faith traditions — Jews, Christians and Muslims — “value Jerusalem,” the secretary of state said. The United States formally recognized Jerusalem as the capital of Israel in December 2017 and moved its embassy to the city in May 2018.

“And so I’m confident that when the administration is thinking about how it is we might finally achieve the Middle East peace that the world has been demanding for decades, I think persons of all faiths … will have something to say about the plan and whether it makes sense,” Pompeo said.

Emily McFarlan Miller is a national reporter for RNS based in Chicago.

They Shall Know We Are Christians By...Our Blogs?