EDMOND, Okla. (RNS) — When Cody and Breanna Brumley began the process of adoption a few years ago, they asked two dear friends in their Sunday School class for advice. A panel discusses foster care and adoption at a rally organized by the Baptist General Convention of Oklahoma and hosted by the First Baptist Church of Edmond, Okla., north of Oklahoma City, on Nov. 13, 2018. Panelists include Alex Himaya, from left, Cody Brumley, Breanna Brumley and Charlie Blount. The moderator was Amy Cordova, far right. RNS photo by Bobby Ross Jr.The stern warnings surprised the couple, who already had two biological children: “There are going to be times that, even though you know God has called you to adopt,” the friends said, “you’re going to feel alone, even in the church.”

“That really broke all of our hearts, sitting there thinking, ‘This is not how it should be,’” said Breanna Brumley, whose husband serves as executive pastor of the First Baptist Church of Jenks, Okla., near Tulsa.

The Brumleys set out to change how their congregation related to families involved in foster care and adoption, creating a Wednesday night fellowship meal and support group called the WRAP ministry.

Cody and Breanna Brumley discussed their experience at a recent rally dubbed “The Gospel, the Church and Foster Care” organized by the Baptist General Convention of Oklahoma, an association of 1,700 Southern Baptist congregations statewide.

The couple’s congregation is just one of hundreds of houses of worship making a difference in this Bible Belt state’s effort to recruit more families to care for roughly 9,600 children in state custody, according to government officials.

Since 2012, the Oklahoma Department of Human Services and its contract partners have recruited 4,200 new foster families — the highest increase in the nation, said Gov. Mary Fallin in a statement last week citing a report by the Chronicle of Social Change. The Republican governor praised houses of worship across the state for their impact.

At the BGCO event, hosted by the First Baptist Church of Edmond, a suburb north of Oklahoma City, Christian advocates for foster care and adoption urged congregations to become involved.

Speakers at the rally included Russell Moore, president of the Southern Baptist Convention’s Ethics and Religious Liberty Commission, who noted that if each church in America supported one foster or adoptive family, the crisis of children without homes would disappear.

Moore, an adoptive father himself, is the author of the book “Adopted for Life: The Priority of Adoption for Christian Families and Churches,” which was distributed to attendees as part of a packet of resources for those contemplating adoption. 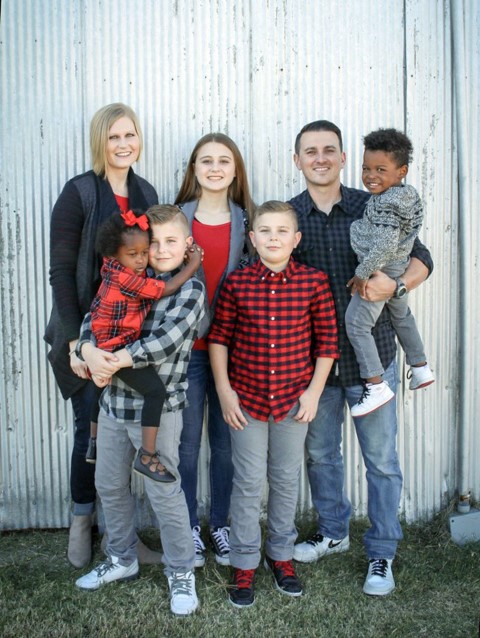 Renee and Charlie Blount have a daughter, Avery, 16, and twin boys, Ethan and Evan, 13. They also have fostered nine children, including two pictured here. Photo courtesy of Charlie BlountMoore said he was impressed by the collective effort in the state. “It seems to me that Oklahoma is miles ahead of most of the country when it comes to calling churches to this task,” he told Religion News Service.

Charlie Blount, lead pastor of the First Baptist Church of El Reno, Okla., said the Bible makes plain the importance that God places on caring for orphans. Even so, he admits that his own connection with foster care began by happenstance. In a series of events he said he still doesn’t quite fully understand, he found himself serving as an emergency caregiver for a foster child — a boy in one of his child’s classes.

“Long story short, we began to volunteer,” said Blount, who with his wife, Renee, has three biological children and has served as a foster parent to nine. “Now, all of a sudden, they’re not just foster kids, but kids with a name.”

Now, about six families at Blount’s church are active in foster care, with “more in the pipeline getting certified,” he said. In the last five years, four other families in the congregation have adopted through the Department of Human Services — two of those from what started as foster placements.

“It will probably be one of the hardest things you will ever do, but it will be worth it,” Blount said in urging other Christian families to foster or adopt. “It will cause you to question a lot of things about yourself … but it will be one of the greatest sanctifiers. And God will use it to bless people.”

Former pastor Chris Campbell leads the 111 Project, an Oklahoma-based nonprofit with a mission of mobilizing churches so that no child lacks a family.

As Campbell explained, the 111 stands for “one church, one family, for one purpose.”

The 111 Project helps organize the Oklahoma CarePortal, a collaboration between the faith community and the Department of Human Services’ child welfare program. More than 300 houses of worship are signed up as CarePortal partners.

On CarePortal’s website, member churches can find families and children in need in their communities, according to Michael McNutt, Fallin’s communications director.

Churches are far from the only community partners working with Oklahoma government officials to address the foster care crisis, but they are a crucial one, Campbell said, praising the governor’s willingness to engage churches in solving the problem.

“It takes the entire community, but to exclude the church from the equation, it would be a big mistake,” said Campbell, a father of four biological children and one who’s adopted. “Because the church wants to help, but if the state doesn’t play well with the church, then the church can’t.” Cody and Breanna Brumley and their children. Photo courtesy of Cody BrumleyAt the Brumleys’ First Baptist Church of Jenks, the WRAP ministry — which stands for “(W)restle in prayer,” “(R)espite care,” “(A)cts of service” and “(P)romises of God” — has helped equip the congregation to support foster and adoptive families.

“None of us thought that the church didn’t want to help as much as they just didn’t know what to do,” Breanna Brumley said. “… So our ministry is, when a foster family or an adoptive family says yes to a child, we say yes to them. They wrap (their arms) around the child, and we wrap (ours) around them.”

About 20 families assemble each week for the WRAP ministry support group.

Others are involved through the group’s Facebook page, Cody Brumley said. Nearly two dozen families in the church have adopted, and eight families in the congregation are available to serve as foster parents.

Every Wednesday night, a church member named Charles Mason greets the Brumleys’ children and gives each a quarter.

At a recent gathering, the couple had an extra child — a 2-year-old staying with them through an emergency foster placement.

“Mr. Charles came by that night, and he didn’t look at us like we had three eyes because we had this extra kid,” Breanna Brumley said. “He laid down an extra quarter, and he said, ‘How long do we get to love on this one?’”