What Netflix Got Wrong: The Fellowship’s Mission Is Love, Not Power - Word&Way
author: A. Larry Ross 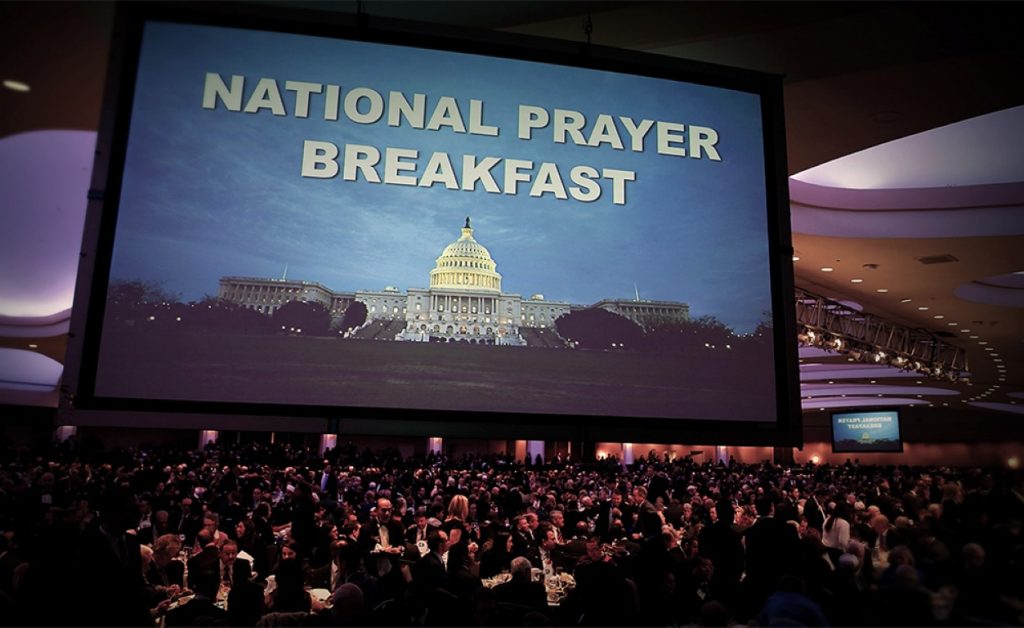 A scene from the National Prayer Breakfast in Washington in “The Family” on Netflix. Photo courtesy of Netflix

(RNS) — “The Family,” the Netflix miniseries released last month about the International Foundation, aka the Fellowship, and the National Prayer Breakfast, which the Fellowship has supported administratively and logistically for nearly 70 years, is the binge-watching equivalent of a Rorschach test: It provides less information for its viewers than validation. The takeaway for anyone who tunes in will likely mirror what that individual brings to it, particularly whether he or she is a person of faith or indifferent or hostile to religious belief.

I was among those whom the filmmakers interviewed under the guise of a fair and balanced story about the Fellowship. Instead, Netflix’s docudrama put forward a false thesis based on a brief anecdotal experience of one of the filmmakers, from which they spin conspiracy theories about political power and international intrigue to fit a biased and pejorative agenda.

The resulting film, edited and designed to provoke its audience and boost viewership, does not accurately describe the integrity and transformational impact of the International Foundation, which I’ve been involved with personally for more than a decade. Nor does it begin to explain why the National Prayer Breakfast, which I have attended for more than 35 years, still matters. “The Family” premiered recently on Netflix. Image courtesy of Netflix

The mission of the Fellowship is to develop and maintain an informal association of people banded together to go out as “ambassadors of reconciliation,” modeling the principles of Jesus of Nazareth: loving God and loving others. The objective of this international network of friends is to build bridges of understanding between all people, with Jesus at the center; all efforts start and end with him.

The focus of the movement and the prayer breakfast is spiritual, not political. It encourages our national leaders and others to gather around the loving, compassionate principles that Jesus taught and lived, with an emphasis on bipartisanship, mutual support and a strong commitment to empower the role of women in every expression of ministry.

That’s why the Fellowship works with the religious, business and political leaders of many nations — not because they are better than others or the people they serve, as the series suggested, but because they have the influence to do something for evil or good, including turning their hearts toward the poor, the oppressed, the widows and the youth of their country. Indeed, 1 Timothy 2:2 (NIV) encourages us to pray “for kings and all those in authority, that we may live peaceful and quiet lives in all godliness and holiness.” Doug Coe passed away in 2017. Photo courtesy of A. Larry Ross

The National Prayer Breakfast’s leadership and the friends who gather annually in Washington for this event have no agenda outside the teachings of Jesus. They humbly serve and openly welcome people of all walks, faiths and creeds – or none – in the spirit of the greatest leader throughout history, Jesus.

Anyone who has attended can tell you that they hear a message of love and acceptance and experience a warm spirit of fellowship that for some is unprecedented. Many individuals are moved in a positive and transformative manner, finding acceptance, understanding, confidence and hope for the future.

A pastor friend told me recently, “When Jesus is lifted up and people are invited into loving community and service to one another in his name, lives are transformed by the power of the Holy Spirit, not by some nonsensical and Jesus-denying teaching about ‘the real gospel being power,’” as the Netflix series portrayed the breakfast’s agenda.

The Fellowship’s leaders, including the late Doug Coe, take a counterintuitive and inclusive approach with everyone — regardless of their reputation, station or spiritual background.

A spiritual mentor to me and many others, Doug did not possess a judgmental spirit, but rather a supernatural love for and openness with anyone he met. He valued and affirmed all the sinners for whom Jesus came — including himself in that group — and lifted up Jesus’ name with authenticity and integrity to the great and the low, the high and the humble. Doug Coe, left, meets with the Reagans in the Netflix series “The Family.” Photo courtesy of Netflix

I experienced that dynamic firsthand at the 2009 breakfast, when my wife and I were seated at the table with Leah Rabin, widow of Yitzhak Rabin, former prime minister of Israel, who had been assassinated at a Tel Aviv peace rally four years prior.

As we exchanged greetings, I asked Mrs. Rabin if she was in Washington just for the breakfast or had other meetings. She explained she was on a two-week speaking tour of America. When I asked the essence of the message she came to share, her reply touched me deeply. “I want to encourage people to not waste their time worrying about or being angry at things over which they have no control,” she said.

When the program began, I turned my chair to face the stage, as I had been sitting with my back to the podium, and found myself shoulder-to-shoulder with Yasser Arafat, chairman of the Palestine Liberation Organization, whose attendance a large group of people had been protesting outside the hotel. When we began our meal after the opening prayer, Mrs. Rabin got out of her seat and walked over to Chairman Arafat, initiated a warm embrace and began a collegial conversation.

That may have been the greatest sermon I have ever witnessed. Such a moment of rapprochement could only happen at the National Prayer Breakfast. What’s more, it is representative of the hundreds, if not thousands, of “graces” that take place each year. Individuals from around the world gather in the spirit of love and understanding in the hopes of deepening relationships with God and their fellow men and women and strengthening the family of nations to further the cause of peace and justice across the globe. While disappointed that spirit is not portrayed in the Netflix series about the Fellowship, I am encouraged by how often viewers are introduced to the person and principles of Jesus, which are at the core of the Fellowship’s mission and message.

In the first two weeks following the program’s debut, traffic to the International Foundation website was up 3,100 times the level prior to the broadcast. Further, more than 1,000 requests were received from individuals all over the world confessing their love of Jesus, wanting to know more about Jesus, asking how to connect locally with Fellowship friends, as well as from international government officials expressing interest in coming to the National Prayer Breakfast.

That result is similar to what the Old Testament patriarch, Joseph, said to his brothers who sold him into captivity, “You intended to harm me but God intended it for good, to accomplish what is now being done, the saving of many lives,” Genesis 50:20 (NIV).

A. Larry Ross is founder and CEO of Dallas-based A. Larry Ross Communications, and for more than three decades served as personal media spokesperson for evangelist Billy Graham. Ross has been a volunteer with the international network of Fellowship friends since 2009.

Progressive Seminary Students Offered a Confession to Plants. How Do We Think About Sins Against Nature?