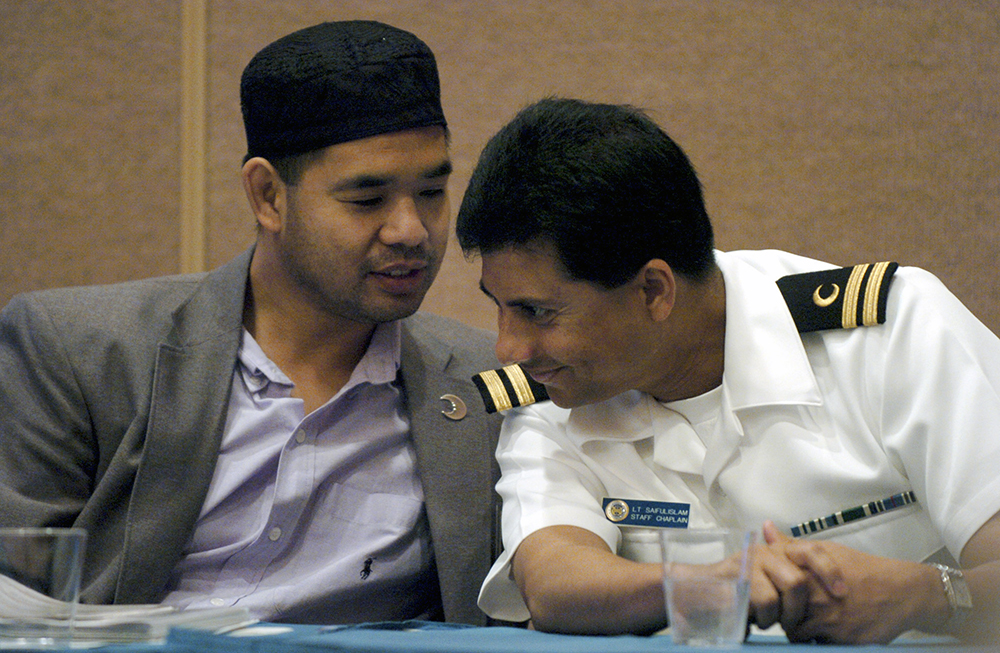 Vice President Mike Pence joins military officers and a chaplain on Aug. 23, 2019, in a prayer for two Army men who died during operations in Afghanistan. (AP Photo/Cliff Owen)

(The Conversation) — In 1919, Lee Levinger buried four soldiers in France. The responsibility to preside over a funeral was not unusual for military chaplains. But during World War I, most Americans would have been surprised to learn that a rabbi led a service for four Christian soldiers.

In 1917, when the United States entered the war, chaplaincy was a majority white and fully Christian organization.

No law specifically stated the acceptable religious backgrounds of military chaplains, but only mainline Protestant ministers and Catholic priests wore the insignia of the military’s religious officers.

By Armistice Day, Nov. 11, 1918, Jews, Mormons and Christian Scientists had joined the ranks of the chaplain corps. As I write in my book, “Enlisting Faith: How the Military Chaplaincy Shaped Religion and State in Modern America,” this significant change inaugurated a century-long project to redefine what counted as American religion.

American military chaplains predate the founding of the republic. The Continental Congress, which served as the government for 13 American colonies, authorized military chaplains to minister to soldiers in 1775. The armed forces have employed clergy ever since. Within the shadow of the cruciform monument to Father Francis P. Duffy, chaplain of the Rainbow Division’s “Fighting 69th” regiment in World War I, the Rev. Joseph Stedman holds aloft a cross as he blesses a group of war veterans, church, civil and military dignitaries in New York on April 3, 1942. (AP Photo/John Rooney)

It was not until the early 20th century, however, that the chaplain corps professionalized and became fully integrated into the military’s organizational structure. At the same time, the variety of religions represented in the corps increased significantly.

The government did not spontaneously decide to make the chaplaincy more religiously diverse. Rather, the draft conscripted millions of young men from varied religious backgrounds to fight for the United States in World War I. Chaplains posted to stations with large clusters of religious minorities, such as Jews at Camp Upton and Mormons at Fort Lewis, began requesting assistance in providing appropriate religious services.

During the summer of 1917, at the behest of the Jewish Welfare Board, Representative Isaac Siegel (R-NY) was also lobbying the military to commission rabbis as chaplains.

No one objected to Jewish chaplains per se – but neither the Army nor the Navy was ready to appoint rabbis without congressional approval.

Six months after the United States entered World War I, Congress passed what was known as the “Chaplains-at-Large Bill.” This legislation formally opened the chaplaincy to “religious sects not recognized” in the military.

It specifically enumerated Jews, Mormons, Christian Scientists, the Eastern Orthodox and the Salvation Army as eligible religions. It allowed commanding officers to request chaplains of these faiths if “sufficient numbers of the adherents of such faiths in their divisions” demanded it. General John Pershing, the commander of the American Expeditionary Force in France, soon requested 25 additional Jewish chaplains.

U.S. society did not automatically accept that representatives of less common religions like Latter-day Saints and Christian Scientists could serve as military chaplains.

While the Army labeled these new religions “Protestant,” many Americans disagreed. After all, their central texts, worship practices and leaders didn’t conform to the norms and expectations of more typical Protestant denominations.

The YMCA, a nondenominational Protestant organization founded to promote “muscular Christianity” in the 19th century, alleged that the LDS Church was “un-Christian” and thus unfit for the chaplaincy.

Similarly, during World War I, when the General Headquarters of the American Expeditionary Force asked the military to send more chaplains to the front, the request came with a caveat: “It is not felt that more Christian Science or Mormon Chaplains are needed.”

Nevertheless, the military’s sanction of these religions changed broader social views about these faiths. As the “New York World” newspaper wrote in a 1918 editorial, Christian Science had been “an anathema to the regular religious denominations” but “now the Government gives it full recognition and accords its readers an equal status with the ministers of other creeds.”

Emergence of a tri-faith America

Rabbis faced less public scrutiny when they donned the uniform of military clergy than Mormons and Christian Scientists. But they encountered a different problem. In 1917, the chaplain’s insignia was a cross – a symbol Jews could not wear since it represents Jesus Christ and Christianity.

The military, however, hesitated to relinquish the cross. Its leaders struggled to determine what its motto “unity without uniformity” meant in material terms: How could it visually designate chaplains as a corps while honoring – or at the very least, not disrespecting – religious specificity?

The compromise, worked out through conversations and negotiations between the military and civilian religious leaders, maintained the cross for Christian chaplains and created a tablet insignia for Jewish chaplains.

The World War I chaplaincy initiated the rhetoric of tri-faith America, the idea that American religion encompasses Protestantism, Catholicism and Judaism. Turning ideals into practice was, however, uneven. In the 1920s, the military constructed a tri-faith hymnal. Although its sections were uneven, it enabled soldiers and sailors to encounter the liturgy of other faiths.

Other developments highlighted the limits of a tri-faith vision. Restricting the options for religious identification on mandatory World War II-era dog tags – P for Protestant, C for Catholic and H for Hebrew – obscured more religious categories than they included.

It took more than a decade of lobbying, but the military eventually abandoned religious abbreviations on dog tags.

Regulations now allow personnel 18 characters in which to spell out their faith preference. In 1994, the military appointed its first Muslim chaplain. Hindu and Buddhist chaplains followed in 2004 and 2011, respectively.

Army chaplain Capt. Yusuf Yee, left, talks with Navy chaplain Lt. Abuhanna Saifulislam, right, during a panel discussion among Muslim chaplains in the military Sunday, Sept. 5, 2004 at the Islamic Society of North America convention in Rosemont, Ill. Yee spent 76 days in custody after the military alleged he mishandled classified information at Guantanamo Bay Naval Station where he served as chaplain to suspected terrorist held at the facility. The government eventually dropped the charges against Yee. (AP Photo/Jeff Roberson)

In 2017, the Department of Defense released a new table of “Faith and Belief Codes” listing over 200 denominations and religious groups that includes Sikhs, Wiccans and Atheists. The five-page inventory earned applause for its wide-ranging inclusivity from some quarters and resistance from others wary of the acceptance of atheists and humanists.

For over a century, the U.S. armed forces have continually grappled with the boundaries of American religion. Cognizant of the pragmatic need to support religious diversity but fearful of too much splintering, the military has shown it can update its policies – albeit sometimes slowly.

Ronit Y. Stah is an assistant professor of history at the University of California, Berkeley.