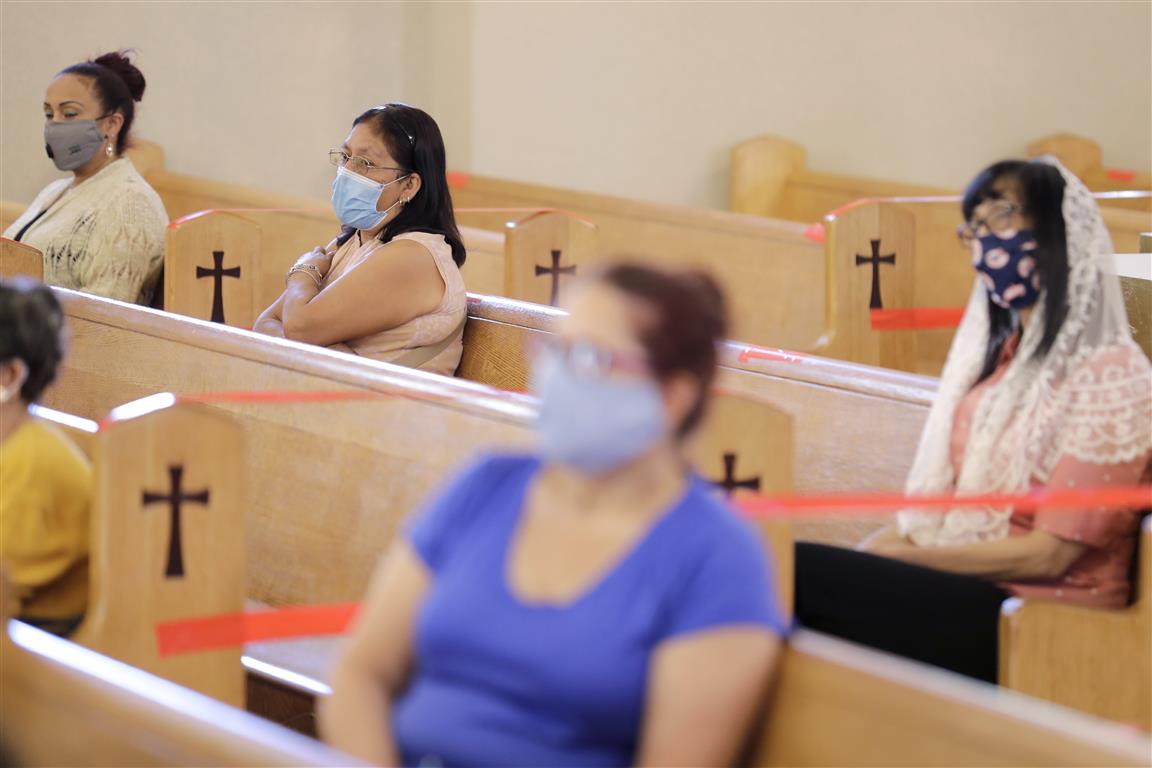 People participate in a Sunday Mass, in pews marked by tape for social distancing, at St. Agnes Church in Paterson, N.J., Sunday, June 14, 2020. New Jersey eased its restrictions on gatherings this week as the state begins to lift measures meant to slow the spread of the coronavirus. Gov. Phil Murphy also said that outdoor demonstrations protected by the First Amendment, including religious services and protests stemming from George Floyd’s death, can be held, regardless of the number of attendees. (AP Photo/Seth Wenig)

(RNS) — A new study examining Americans’ response to COVID-19 shows that with the exception of white evangelicals, a majority of Americans are not comfortable returning to in-person religious services.

The results of the survey suggest that despite political pressure to reopen houses of worship — from President Donald Trump as well as leading conservative Christians and religious liberty advocates — Americans aren’t quite ready to take a seat in a sanctuary.

The survey from the American Enterprise Institute showed that 64% of Americans said they were “somewhat uncomfortable” or “very uncomfortable” attending in-person worship.

Even among those who reported their congregations offered in-person worship in the past week, 56% of respondents said they chose not to go.

“We’re seeing among lay people a significant amount of discomfort in going back to formal in-person religious practices,” said Daniel Cox, a research fellow at AEI who led the study. “People are equivocating and uncertain about whether they feel comfortable attending.” The study, conducted in late May and early June among 3,504 Americans, comes amid ongoing, politically charged campaigns to reopen. Last month, the president demanded that states allow places of worship to reopen “right away” and said he would override state governors who refused.

On Tuesday (June 23), Trump was scheduled to address a group of young Republicans at a Phoenix megachurch, even as the Democratic mayor of Phoenix made clear she does not believe the speech can be safely held in her city.

At the same time, stories of church outbreaks grow. Last week, a Pentecostal church in northeastern Oregon was linked to the state’s largest coronavirus outbreak to date — some 230 cases. The church held services in defiance of Oregon’s stay-at-home order.

The AEI study found sharp racial and partisan disparities in Americans’ response to the crisis, with Democrats more concerned about contracting COVID-19 than Republicans. While 72% of Democrats said they are at least somewhat worried about a household member becoming infected, only 43% of Republicans said the same.

Those political differences drive religious views. The only religious group comfortable with church reopenings was white evangelicals — strong partisan supporters of the Republican Party and Trump.

By comparison, 36% of white mainline Protestants, 32% of Black Protestants and 39% of white Catholics said the same. (Among major non-Christian religions, 26% said they would be comfortable returning to in-person worship services.)

Broadly, a majority of respondents were taking a more cautious approach.

Some 54% of Americans said life in the United States will not return to normal until 2021. They expressed hesitation not only with worship services but said they would be equally uncomfortable attending sporting events, eating out at a restaurant or going to a movie theater.

Only 45% said they would feel comfortable going to their polling place to vote.

In the South, where cases of coronavirus have surged in the past few weeks, that ambivalence about reopening is palpable.

“The ones going back are smaller churches where the gathering size is easy to control,” said Chris Turner, director of communications for the Tennessee Baptist Mission Board, which has some 3,200 affiliated churches, the state’s largest denomination.

But Turner said even among those churches that have started to reopen, attendance has been spotty.

In Louisiana, where Gov. John Bel Edwards has paused the state’s Phase 3 reopening until July 24 after a spike in coronavirus cases, many churches have transitioned to a hybrid, in-person and online model.

“There’s only so much you can do to alleviate a fear,” said John Kyle, communications director for Louisiana Baptists.

Louisiana’s Baptist convention is encouraging pastors to be supportive of members who hesitate to return to in-person worship, Kyle said: “If you don’t feel comfortable coming back, we understand.”

Baptist churches are autonomous; each can make its own decision on whether to reopen.

But the reality is that many churchgoers are staying home.

Turner, the spokesman for Tennessee’s Baptist Convention, acknowledged he himself falls into that category.

“In my heart, I’m there with you,” Turner said of in-person church services. “I’ve been a longtime teacher in Sunday school. But at the same time, I’m going to let you work out the bugs before I come back.” What Research Has Revealed About the New Sunday Morning